Pelvic pain in women can be caused by many conditions and is evaluated during the infertility work-up. Endometriosis occurs when cells that normally line the 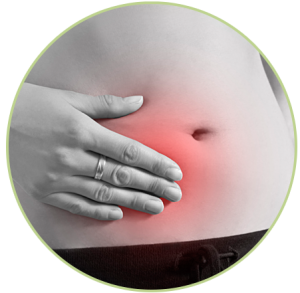 uterus, attach to other organs/structures and continue growth and division. Endometriosis can cause pain during menses, intercourse, urination, and bowel movements. Adenomyosis is the occurrence of endometrial tissues in the muscle of the uterus where it does not normally occur. Sometimes pain is caused by a cyst(s) formed on the ovary. Fibroids and polyps can cause pain, dependent upon their size, location, and other factors. These conditions are usually diagnosed in the hysterosalpingogram or hysteroscopy. When obstructions are present they are removed using laparoscopic or hysteroscopic surgery. Ovarian cysts can also cause pain or a “feeling of pressure”.

Sometimes painful pelvic adhesions form after surgery. Additionally, pelvic infections can cause pain and if untreated can result in pelvic inflammatory disease. Infections can occur in the tubes, ovaries, uterus, bladder, and other structures.

Disease of the bowel such as irritable bowel syndrome or Crohn’s disease can also cause pelvic pain.

Given the many potential causes of pelvic pain, it must be evaluated by a physician. Various tests will be ordered and include:

Blood tests and cultures of the cervix, or other areas, to identify infections. A urinalysis will be ordered to rule out a urinary tract infection.

Hysteroscopy will be used to evaluate the inside of the uterus and vaginal tract.

Pelvic and transvaginal probe ultrasounds will be ordered to examine the various reproductive organs for growths, masses, or other abnormalities.

If other testing does not identify the cause (s) of abdominal pain a cat scan or MRI may be ordered.

If bowel involvement is suspected a barium enema or colonoscopy may be ordered.

Chronic pelvic pain may result in depression and loss of sexual desire and it is important that the emotional aspects be considered. The treatment of pelvic pain depends upon its cause and conditions such as endometriosis may be treated with medications and/or surgery. The treatment varies based upon the extent and location of the endometrial implants. Laparoscopy, performed by a reproductive specialist, is often effective in removing endometriosis, fibroids, polyps, and correcting other abnormalities.

In some cases oral contraceptives will be used to regulate the menstrual cycle and reduce associated pain. Chronic pain may be responsive to nerve blocks, stress reduction techniques, or pain medications.

If the uterus, or other reproductive organs, are seriously damaged a hysterectomy may be the only alternative to alleviate the pain. This procedure can now be performed through the laparoscope thus greatly reducing pain and recovery time. If a woman who has had a hysterectomy desires genetically related children, her eggs (the ovaries must be present) can be used in an IVF cycle with a surrogate mother. In the absence of ovaries, donor’s eggs can be used in the IVF surrogacy cycle.

This site uses Akismet to reduce spam. Learn how your comment data is processed.

We are a unique institution based on four cardinal principles of medical service: Excellence, Expertise, Integrity and Care.

The directors at FERTILITE saw the need to develop a Fertility and Advanced Reproductive Technology Program with a simple vision in mind: Make the hope of having a child affordable to infertile couples, by providing the best care at an affordable cost in a friendly and compassionate environment.

Email us with any questions or inquiries or use our contact data.